Anyone who hangs out with me on even a semi-regular basis will notice that I have three staple beverages. The first is Mountain Dew, the second is Heineken, and the third is a 1 litre bottle of water that I continuously refill.

Now the argument of water being good for you or not is a mute point. It has a pretty obvious answer. Heineken on the other hand could be argued, but considering it’s amazing ability to help me dance among other things it’s staying. Which leaves us with Mountain Dew.

The fact that I even drink pop in general amazes people when they find out that I’m a Pescetarian. I can’t remember when I got hooked up it, but I venture to guess it was sometime just after high school when I started to make more of my own choices for what I consumed in the food department. Lately however I’ve been questions my decision to drink pop. I even stopped drinking pop all together for a week about 4 months ago in an effort to see the effect it had on how I felt. After feeling so much better after becoming a Vegetarian about this time last year and then eventually moving on to a Pescetarian, I had high hopes of for removing pop from my diet. At the end of the week I could tell an amazing difference. Somehow however I slipped back into my old habit and within another week or so I was back to drinking it as usual.

Today I am going to try again in giving up pop all together. I’m sure some people will laugh at me and say it’s such an easy thing to do. Think about going to any restaurant, fast food or not. The corporate food industry has built the way you build your ‘value’ meal around pop.

I haven’t decided how long I will give it up or if I will ever drink pop again. I will take an educated guess and say I will probably go at least 2-4 weeks without any pop and then possibly have one on occasion after that. For now I will leave you with a photo of the ‘the king’ reading the nutritional information on a Mountain Dew can. 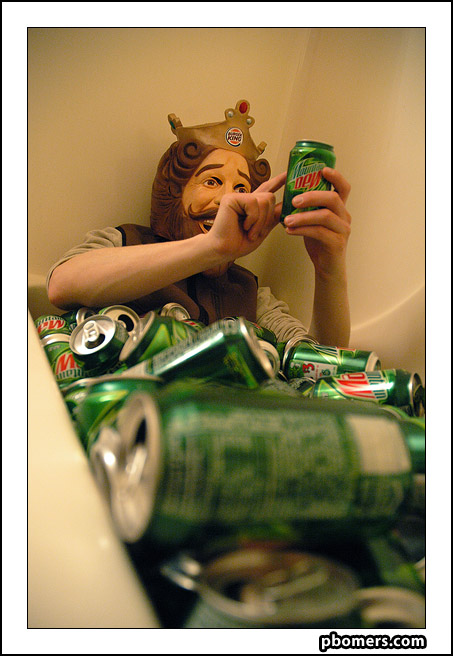